In Minimally Invasive Gynaecologic Surgery (MIGS), major or minor Gynaecologic Surgeries for women’s disease can be performed via small incisions or openings. This is commonly known as the “keyhole” or laparoscopic technique, since the size of the wounds can range from 0.3cm to 1.5cm depending on case.

Laparoscopy utilising multiple small incisions has been the main technique to perform such Minimally Invasive Surgeries. Over the years, MIGS has evolved and nowadays it can be performed using conventional multiple incisions or even single incisions, also known as SILS (Single Incision laparoscopic Surgery).

Other than that, Single incision surgeries have progressed to the stage whereby a “totally scarless” technique called the VNOTES(Vaginal Natural Orifice Transluminal Endoscopic Surgery) can be used to treat patients. VNOTES is totally scarless, affording the superior advantage of even faster recovery and lesser pain since the disease or pathology is removed via advanced endoscopic techniques though the vagina. Advanced Robotic Arms can also be used to perform MIGS.

For Gynaecologic Cancers, MIGS has also gained pace over the years and it is possible to treat Women’s Cancer using precision surgery such as the “Sentinel Lymph Node” Technique, whereby a selective resection of lymph nodes will reduce complications and morbidity for the patient. Chemotherapy and radiotherapy as adjuvant can also be started faster after MIGS, contributing to better survival and lower recurrence rates.

The hallmark of MIGS is “shorter hospital stays, faster recovery and fewer wound related complications”. MIGS is also referred to as virtual surgery; as the surgeon performs surgery while looking at an image projected by a high definition screen monitor.

According to Obstetrics and Gynaecology expert Dr. Chua Peng Teng, “Minimally Invasive Surgery has a better outcome in terms of patient recovery whereby we minimise the trauma and tissue damage to the patient.” 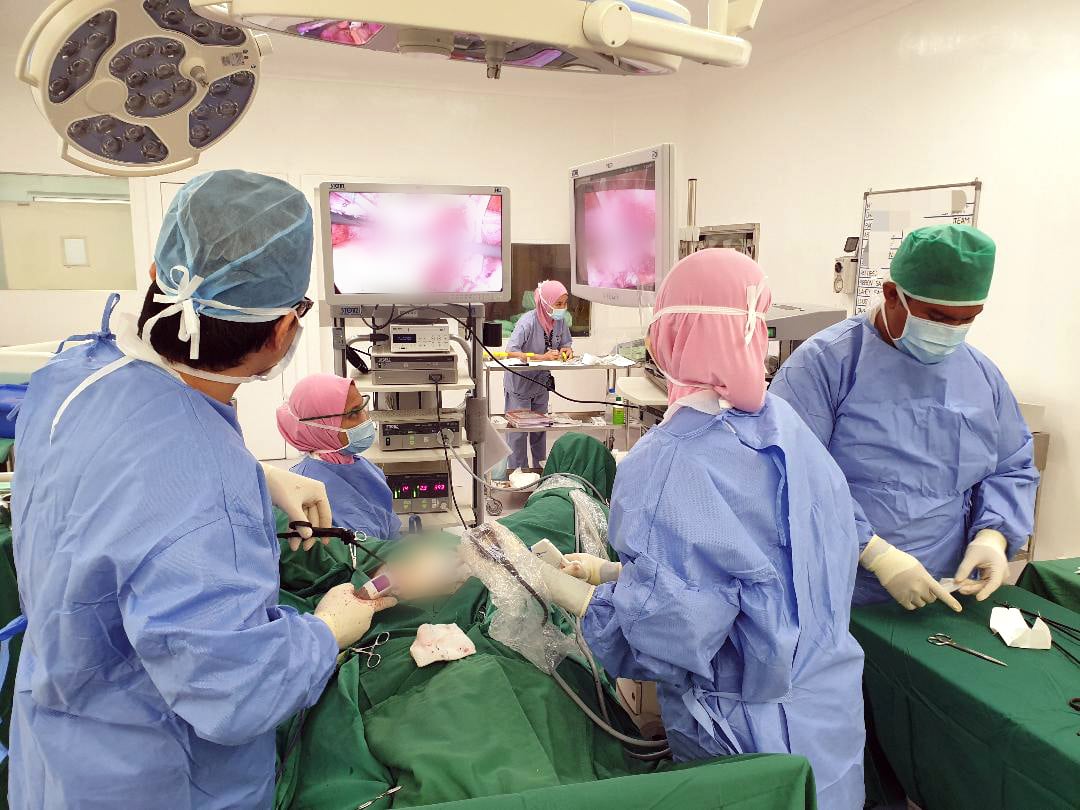 MIS uses high definition magnification, which enables precision surgery for better outcome. It involves a team of healthcare professionals and a wide range of diseases can be treated via this approach, either through natural orifice (example: vaginal outlet) or small abdominal openings. 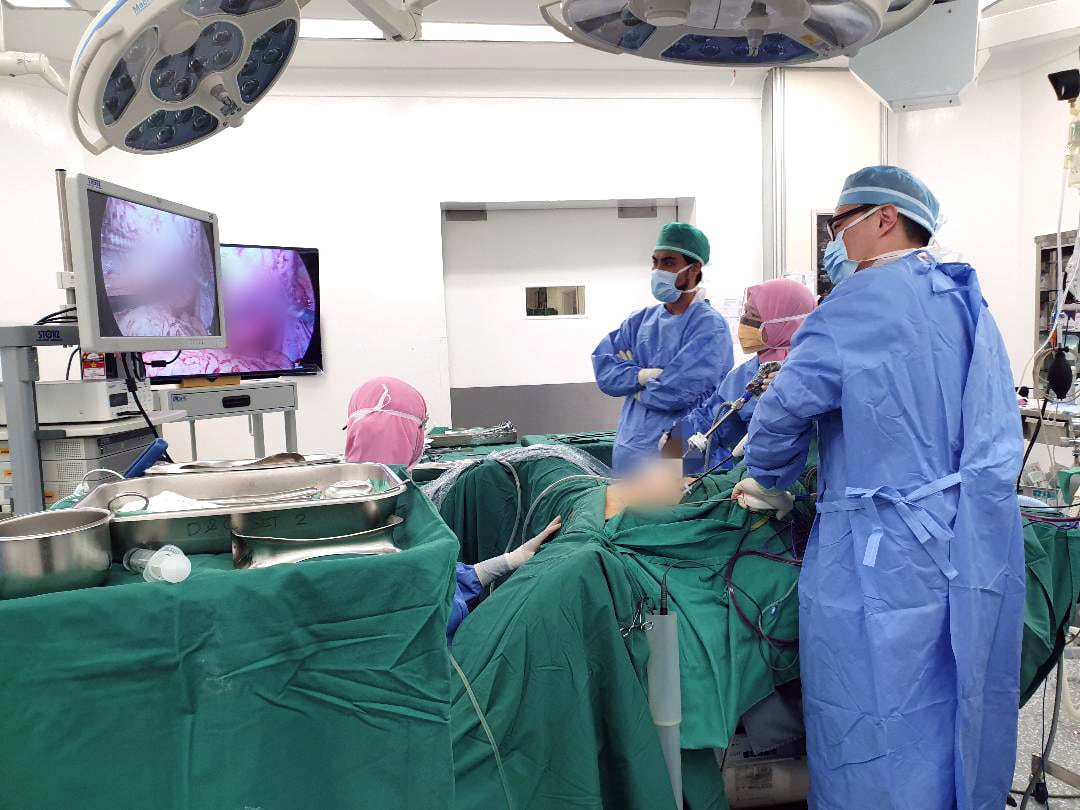 Other than operating from small holes on the patient’s abdomen, a total scarless approach can be done using natural orifice (openings) such as the vagina, utilising the advantage of scope and MIGS. 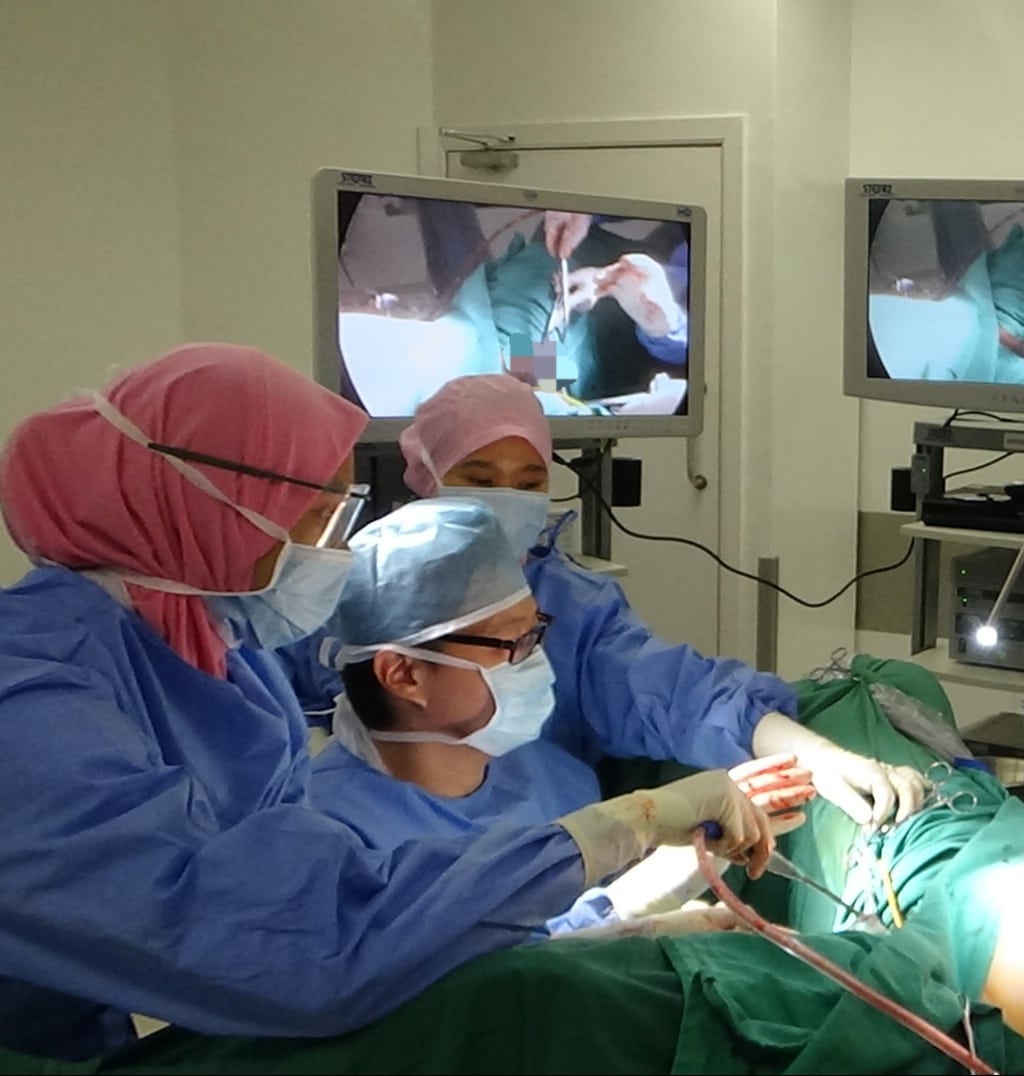 Known as vNOTES(Vaginal Natural Orifice Transluminal Endoscopic Surgery), this method uses single or multiple entries. It can also be done with no entry on the abdomen, rendering it totally scarless.

How Did MIS Emerge?

MIS was first described in 1900 in the form of Laparoscopy by Dr. Georg Kelling, a German surgeon, who called his procedure “koelioskopie”.

Subsequently, Minimally Invasive Surgery evolved and gained popularity under the efforts of many Surgeons over the years – as a safe and effective surgical technique. Many surgeons and patients prefer MIGS to the more traditional open surgery.

Radical Hysterectomy for Cervical Cancer via MIS has been done since the year 1992 and for early stage cases, 5-year survival rates can be as high as 100%; due to the advancement in technology as well as energy devices available. Standardized training and technique are also vital in MIS.

“When it comes to surgery, we have to see it from the patient’s perspective – what a patient expects to experience when undergoing procedures and recovery.”

Dr. Chua adds that one of the biggest challenges of open surgery is the large wound left behind after doctors make a large incision. “Compared to MIS, the wound is tiny. It can be milimeters or 1cm in diameter, and even in bigger operations, the size may go up to 1.5cm only (which is roughly the size of your finger-tip).”

Book an appointment
What Are The Advantages Of MIGS?

MIGS can be used for a wide range of diagnostic and surgical procedures. Generally, minimally invasive gynaecologic surgery is associated with less pain, a shorter hospital stay, and fewer wound-related complications. In some cases, wounds such as the dreaded “Burst-Abdomen”. A burst abdomen can happen to big wounds from open surgery. It may occur to patients who are obese or has other co-existing diseases such as Diabetes, hypertension.

Such complications are almost non-existent in MIGS, where the opening is only the size of the finger-tip, or even smaller.

“This leads to not only patient confidence, but also their caretakers, which in turn promotes a speedy recovery.”

The benefits of MIGS may include:

Which Gynaecological Disorder Is Best Treated With MIGS?

Depending on your symptoms, MIGS and virtual surgery can treat the following gynaecological conditions, such as:

What Are The Risks Of MIGS?

If you are considering gynaecologic surgery such as MIGS, it is crucial to know the potential risks and complication of MIGS. According to Dr. Chua, “MIGS requires intensive monitoring. The use of anaesthesia, advanced energy devices, and the skill of the doctor is important.”

Just like open surgery, the risk of MIGS is similar in terms of anaesthesia risk. Whether it is open surgery or MIGS, there is always a risk of injury to internal organs albeit a small risk. Other common risks for both include risks of bleeding, requiring transfusion.

Specific to MIGS however, is the potential risk of needle injury while inserting gas medium into the abdomen.

Other than that, the use of CO2 gas needs to be monitored unlike open surgery. The anaesthetic team also needs to monitor patient parameters more intensively in MIGS. This requires good coordination and team work among doctors.

< Back to Main Page
Make An Appointment With Us Now!

Get the right treatment, for the right diagnosis, at the right time.
Begin your treatment journey with us here at Mahkota Medical Centre.